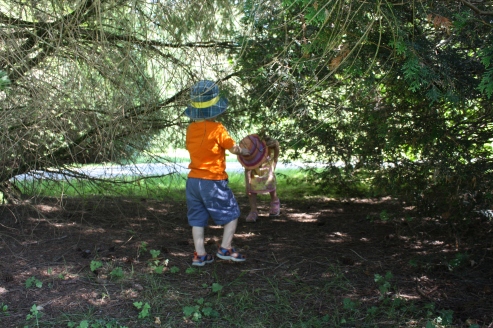 But I wonder what other kinds of reading she will need to master in order to make sense of the world in this age of climate change?  Should she know how to ‘read’ the land as her ancestors used to do?  To know what to expect when certain flowers are in bud or when the wind shifts or when particular birds arrive in the garden?

David Suzuki seems to think so. In a recent column he makes the case that children should learn how to observe the natural world. What he calls “observe” others like David Orr and Fritjof Capra call ecological literacy, a way of observation that decodes signs in nature in the same way that we decode squiggles on the page in traditional literacy.

If children learned to read their environment, what changes could we expect in society as they grew up?

One change perhaps would be the eradication of what Richard Louv calls nature deficit disorder, a result of children spending less time outdoors and too much time indoors, cut off from the natural world.

Each year when I take my  teen students on field trips into natural spaces, I am amazed at the transformation that happens when they spend time among the trees or just skipping stones on the water. It’s as though they have just woken from a deep sleep and are seeing the world anew. In effect, they probably are, given the amount of time they spend staring at screens instead of their immediate environments.

If children learned to  read their environment, they would have first hand experiences of changes wrought by climate change, experiences and knowledge that could not be ‘spun’ by the fossil fuel industry that spends billions each year fuelling climate change denial.

Environmentalist often lament the fact that our children can recognize more brand logos than they can tree leaves. Ecologically literate children would not only be able to name trees and describe their leaves but would also be able to name the kinds of fauna that depend on the tree for survival.

An ecologically literate child would know that some forest bathing would do more for her stress level than retail therapy would.

An ecologically literate child would know the connectedness of all things, that whatever we do to the earth, we do to ourselves.

The scientific revolution gave us new tools to read the world beyond the visible light section of the electromagnetic spectrum. Before that dramatic change in the way we saw the world,  we had to know how to read the land for our own survival and so paid close attention to every detail of the natural environment.  These days we would sooner check the Weather Network online on our computers before we went outside to see what the weather was.

Before the scientific revolution, we would know when seasons changed when we saw signs of the coming change in trees, in plants, in the sky. Now we look at a calendar.

If we could integrate the kind of knowledge humans had about the natural world before, with the knowledge that we have gained through math and science, how much more could we read and see and know about this place, our cosmic home?

In an age of climate change, when all around us nature is signalling her distress, perhaps one of the most critical skills we all can have is the ability to read our environment,  the ability to read the sky, the land, the water, the plants and the trees.

We can’t all have the knowledge that the scientists on the UN Intergovernmental Panel on Climate Change do, but we all can know a little more than we currently do about what is normal and what is not in the natural world around us.

We should all join Alice in learning how to read, ecologically.