I always know when I’ve dropped one of the gajillion juggling balls that is my teaching job. It’s when my students’ faces have the kind of look a puppy has when it’s being blamed for something it didn’t do. They look at me all wide-eyed and wondering what just happened as they listen to me express frustration.

This frustration always happens when I temporarily forget what I know about what my students need. One time, at a moment when I was exhausted and distressed, I forgot that lecturing after 1:00pm is an utter waste of time, completely out of sync with students’ circadian rhythms.

At the time, I was so caught up in my determination to move forward on a project, that I completely ignored the signs that it was not a good time to do so.  But when I noticed those puppy-eyed looks, in the midst of my complaints about their inattention, I realized that something was wrong, and so I asked.

They reminded me that I was expecting them to focus on listening at a time when they’d normally be napping. I had forgotten that the schedule for that day had been moved forward an hour and that on any other day, they’d be on their yoga mats, listening to a recording of the sound of rain, while focusing on their breathing.

And, once again, embarrassed, I apologized.

Splotched on the tapestry that is my relationship with my students, are apologies of all kinds. Regrets for lapses in judgement, feelings of remorse for slips of anger, anguish over my inability to keep all those gajillion balls floating in sequence throughout my teaching day.

But I know that would take superhuman effort of which I’m incapable. 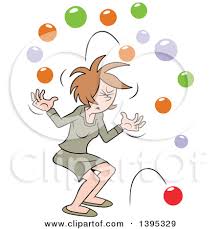 What I am capable of is being aware of when I mess up, and then gathering the courage to clean up.

I clean up by apologizing, of course, and then by taking inventory of what I did and didn’t do leading up to the point when the balls were dropped.

Usually there’s a missed yoga class, a missed meditation session, many missed walks, and a long list of things to do on my desk.

As a teacher, I know that I’m never going to get to zero on my to-do list but I can certainly move up from zero on my well-being list.

I love that well-being is getting lots of buzz lately now that education reform has taken a turn away from standardization and toward the critical importance of emotions and relationships in learning.

We teachers have always known this but it’s nice to have the powers-that-be elevate its importance to being a core competency in the new curriculum.

I just wish the Ministry would realize that expecting teachers to be effective models for personal and social competency while we are experiencing stress due to the effects of 15 years of deep cuts to education funding, and while we are reeling from the turmoil of a massive system change, is asking for too much.

You would think the Ministry would know that, given the fact that personal and social competency is just another way of talking about relationships, it would be motivated to change its relationship with teachers.

It would be nice to have a healthier relationship with our government, a relationship in which there was a demonstration of respect for our professional expertise.

Instead, we teachers are not only regularly maligned in the media, but we also have gone to the Supreme Court of Canada to defend our constitutional rights.

What we have here in British Columbia is the ironic situation of a government rolling out a new curriculum that situates social and emotional well-being at the centre of learning while it simultaneously undermines teachers and underfunds public education.

I bet there’d be barely any dropped balls in my classroom if I had the kind of support and respect that teachers in Finland and other countries have. This is not to say that I don’t accept the responsibility to take care of myself so that I am prepared to take care of my students.

It’s just that the BC Liberals certainly don’t make that task any easier.

Having dropped the ball on public education in 2002, there is no indication that they have any intention of ever picking it up again, funding-by-photo-op in an election year notwithstanding.

Now, if you’ll excuse me, I’m about to ignore that pile of marking on my desk while I take myself for a well-being walk on this beautiful Sunday.

2 thoughts on “Dropping the Ball”