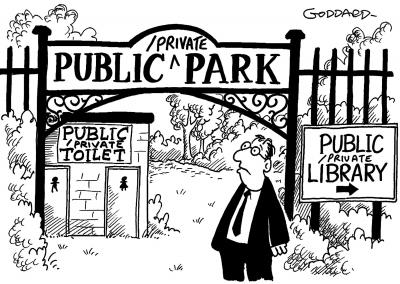 As a technology corporation you have long been aware of Rupert Murdoch’s suggestion to invest in the education sector that is worth trillions of dollars. Unfortunately, as you are also aware, investment in this sector is particularly tricky and requires much patience.

By following the previous suggestions on how to lay the groundwork for investment, you will be ready for the implementation phase.  This phase too requires subtlety and a soft approach.

There are a few ways you can prime parents and the public into accepting privatization in schools.  One way is for corporations to provide resources either in the form of textbooks and other learning materials or in the form of cash that students and their parents earn when they purchase particular products.  Chevron’s Fuel your School is an excellent example of the latter.

Another way is to have teacher-run cafeterias replaced by those run by corporations such as Chartwells,  although profit is not always assured as was the case in New Brunswick.

A third way is to encourage corporations to support charitable handouts to schools as in the case of Postmedia’s Adopt-a-School program.

Of course vending machines in schools have long been a source of revenue for both the corporation and the school, and provide a good example of the kind of private-public partnership you want to encourage.

It’s necessary to have a public relations firm work with the politicians you are funding to ensure that they use language that frames the discussion of public education in a way that is favourable to the privatization project.

When your politician reduces the education budget, it’s important that she refer to members of the public as taxpayers.  Her message should be that she is concerned about taxpayer resources, that she wants to ensure that taxpayer money is not wasted.

However, in the event that the teacher union engages in strike action to force a settlement of their working conditions, it’s critically important that your politician speak of her concern for the inconveniences suffered by parents when schools are closed.

It’s useful to have your politicians enshrine balanced budgets into law.  The general public is law-abiding and intolerant of those who break the law. This is helpful when a rebellious group of school board trustees refuses to submit a balanced budget.  A media campaign that frames them as lawbreakers will distract the public from funding cuts.

Because all households are aware of the need to balance their budgets, it’s easy to convince the public that school districts need to do this as well.  Your politician should  be seen to be acting on behalf of the taxpayer and protecting their “resources” when she insists on a balanced budget.

One can’t stress enough the necessity to ensure that groups of parents and teachers do not join forces.  This is why it’s critical that school rankings such as those provided by the Fraser Institute are vigorously defended. It’s unfortunate that in BC a school in Bountiful, where polygamy is practiced, was ranked highly when schools that provide breakfast programs and other social supports for students were not.

When the rankings get a lot of attention in the media, they are legitimized. Another benefit is that there is a spotlight focused on schools that are “failing” to meet the needs of students.  With the right media in place, this failure will be seen to be the fault of teachers and school boards.

Remember that the foundation of all business models is the provision of a service. It’s in the best interests of corporations that schools are seen to be failing. After all this was the reason given by Milton Friedman himself when he promoted the privatization of schools as a way to save public education.

You may encounter criticisms of your privatization project especially from those members of the public familiar with the failures of privatization in places such as Chile and in many parts of the United States.  The good news is that by the time the public cottons on to the flaws of privatization, your corporation will have already benefitted from government contracts and can then move on to new projects in other parts of the world.

Word is that Africa may be ripe for reaping should projects in North America fail.